In my last post on this topic, I wrote the following:

As I’ve mentioned many times here, organizations get stuck on the idea that lean principles just cut costs and waste. They don’t consider or aren’t open to the notion that lean actually adds capacity and capability…the capacity and capability to do something that couldn’t be done before.  In effect, companies are required to answer, for themselves, the question:

‘If we weren’t doing what we’re doing today…what would we be doing?”

We all know what would happen to operations with additional capacity…make the same amount of stuff with fewer resources or make more stuff with the same resources so that the cost per unit goes down.  But what would supervisors and managers who aren’t having to respond to moment by moment fire alarms be doing?  What would their bosses be doing?  Designing new products?  Designing new processes?  Making quantum improvements in existing processes?  Finding new customers?  Entering new markets? The fact that these are difficult questions to answer lies at the root of the difficulty of culture change necessary to implement lean.  Because managers can’t put their fingers on just what the value of extra capacity would be (or, maybe, don’t really believe that lean will create extra capacity), their motivation to implement lean is bounded.  Lean isn’t successful in those organizations, not because the concepts and tools aren’t effective but because those managers aren’t very imaginative.  It’s difficult for them to picture the transformational value of lean concepts and methods.

Just a few moments ago, I took a break from writing and checked out some of the lean blogs I have bookmarked.  Here’s a quote from the first article [Why Practicing Lean Thinking Matters (Even if Your Bosses Don’t Care)] that I came across:

“If your boss doesn’t get it, don’t expect to convince them – unfortunately, I’ve never seen that happen. Do expect to get them interested if you manage to make them look good with your results. Then they sometimes take the plunge (I’ve seen that happen). Don’t expect corporate staffers to ever stop ruining your lean efforts with occasionally really stupid decisions.”

Think about that for a moment…an article that addresses the need for implementing lean where bosses so lack imagination, so lack any idea of competitive advantage, so lack a sense of strategy that they must be ignored or worked around by their subordinates as they implement lean.  It’s easy (and appropriate) to blame such bosses for their own myopia.  But I think the fact that lean concepts have been presented as simply “tools for improvement” rather than as “strategy that transforms the business” is partly at fault. 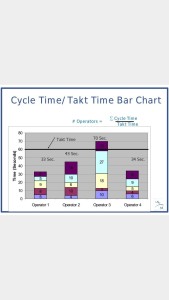 After reading that article, I continued to dally, checking out my LinkedIn feed.  I found a discussion about what’s called (I learned) a yamazumi chart.  The chart shows that there’s overcapacity in the cell.  (If you don’t understand that it tells us that, leave a comment and I’ll go over it with you.  It used to confuse me as well.)  Here’s the thing…in the way lean has traditionally been presented, this represents “waste” that should be removed, thus saving cost.

If lean were presented as a transformational venture, that extra capacity would be seen as an opportunity to do something, to create something that didn’t exist before rather than as waste.