Yep, I changed things around a bit here and splashed on a new look.  It’s a bit cleaner and (I hope) a bit better organized.  I hope it suits.

Here’s an interesting paragraph I ran across in my recent reading ramblings:

“For instance, it was assumed that assembly labor was the significant, intractable piece of the pie, one that could easily be transplanted to foreign shores at great savings. Actually, that category of labor averages closer to 4-5 percent of product cost. Finished materials consume roughly 70 percent and overhead another 24-25 percent.

Piece parts were the very tip of the iceberg that somehow went to bid and largely decided overseas deals. This left behind fixed assets in plants, the same management overhead, increased travel, new customs fees, and greater outlays for logistics. Insufficient quality and time-to-market penalties were the other giants hiding under the waterline of standard accounting. Rarely were these factors assessed and attached to the part or assembly of parts under bid.”

via How An Old Analysis Technique Could Strengthen The U.S. Manufacturing Revival – Forbes.

I think this is a nicer way of saying:

“Much off-shoring was undertaken by managers who didn’t know what the hell they were doing.”

From time to time, in my posts, I’ll mention books I’ve read.  I also do book reviews.  Generally, I provide links to Amazon in case a reader wants to purchase the book right then and there.  Well, it turns out that, by joining with Amazon affiliate program, I can get a small commission (4% up to 10%) whenever somebody does this. I figure I’ll make about $10 a year this way…if I’m lucky.  But I also figure there’s no downside.

Why do I bother to mention this?  If I’m making money from something you do (buying a book from Amazon), you should know about it.

OK, that’s it for barely relevant news…back to the good stuff.

One of my first “top to bottom, fron 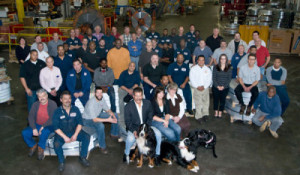 t to back lean initiative” clients was Talan Products here in Cleveland.

Looks like I didn’t mess them up too badly.

I’m putting together a workshop in Workplace Organization and Visual Factory (aka 5S….but I’m not crazy about the term 5S because, like so much of  lean jargon, it doesn’t really tell me anything).  I’m always looking for good photos of  WOVF examples.  True, there are lots at my own clients but I get shy about asking permission and all that.  So, I go looking across the web for photos.

I just found a good batch of photos at 5S Best Practices.  Check them out, especially if, like me, you need good examples like these to show others what WOVF is all about.

I took care of the backlog of “spam comments”.  You’re good to go, so comment away.

You know, I get hundreds of comments to the posts I write here.  (At the moment, theres a backlog of more than 1400 comments.)  The problem is, all of them (so far as I can tell) are spam.

That means that there might be a few legitimate comments that I’m not seeing that aren’t getting posted because I don’t want to wade through the backlog.  Especially given that, within a few days, it would be right back where it is now.

I’m going to figure this out eventually (I think there’s a way of attaching one of those Captcha widgets that make you type in the fuzzy numbers), but until then, you probably won’t see your comment below a post.

I’m always eager to hear what you have to say, though, so, for the time being,  use the contact page anytime you just have to respond to a post.

You’ll notice I’ve changed the name of the blog to Lean Manufacturing Update. The reason is shamelessy commercial…I’m hoping it shows up better in web searches. After all, if you were looking for info on “lean manufacturing”, would it occur to you to search on “agile manufacturing”? Exactly.

I still like the term “agile” better than I do “lean”. But I hope I’ll get to say that to more people by changing the name of my blog.

I used to have this blog on the regular Godaddy blog software.  They bagged the blogging business, pretty much leaving me in the lurch.  So now I’m on WordPress, hosted by Godaddy (I’m still trying to figure it all out).  The worst part about it all…I lost all my previous content.  Yeah.  All of it.  I had some good stuff there, too.

I’m not sure if it was my fault for not doing…something, or Godaddy’s fault for not telling me to do something.  Or maybe there wasn’t anything  that could be done, I forget.

I did this series on how to implement lean, step-by-step, that I was always proud of.  It was well received (if the Godaddy site stats were to be believed).  I’m going to do it again because, well, again, it’s good material and because I’ve updated my approach.

So, come back here every so often and see what I’ve added.

I used to work for a large steel producer. It happens that the large steel producer would lose coils of steel that it had made for customers.  Now, I lose my keys once in awhile but I coil of steel is seven feet tall and weighs several tons.  How do you lose something that big?

Here’s how it happens:  a coil of steel gets produced and needs to be moved out into the steel yard.  It’s supposed to go into a specific bay so it can be retrieved again later.  But when the material handler gets there, another steel coil is in the bay.  Now the material handler has a problem:  does she take the offending coil out of the bay and put the right one in?  Does she just drop the new coil into another bay?  Does she take it back to the supervisor and tell him that there’s already a damn coil in the damn bay he told her to take this one to?  The choice with the mildest short term consequences is to drop the coil in another bay and make a mental note to correct the problem later.  But she forgets and by the time someone else comes to retrieve that coil…it’s lost.

This principle has several corollaries:

Too often, lean methods are implemented as if the system was OK but the people just needed a little help doing things differently (shadowboards are a great example of this).  The bedrock of lean is a system of production that’s very different from the one you probably have now.